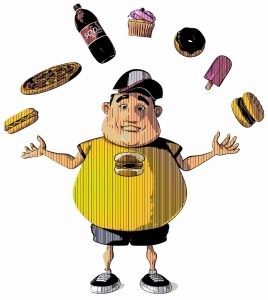 Obesity is affecting more and more people worldwide according to a recent report by the World Health Organization (WHO) featured in the medical journal The Lancet. It is estimated that half the population of the US may be obese by 2030 if nothing is done to stop this disturbing trend.

Obesity is a chronic condition which has devastating health implications, including increased mortality rates of severely affected individuals. Cases of type 2 diabetes, certain cancers, and coronary heart disease are directly attributable to obesity, and are responsible for personal suffering and premature death. The cost to the health system is also considerable. Health officials in the US have labelled obesity as an epidemic.

While some nations struggle with widespread malnutrition due to famine, other countries are fighting a battle with obesity. Low and middle income countries are noticing an unhealthy weight gain among certain populations. In some nations a duality exists in which different segments of the population are affected by malnutrition and obesity. Obesity occurs in high-income populations in poorer countries, whereas it is most prevalent among low-income people in the US. Worldwide, 502 million people are considered to be obese.

Rates of obesity appear to be affected primarily by a change in the global food supply worldwide, as well as easy access to cheap processed food. A sedentary lifestyle also contributes to weight gain.

World leaders are due to meet in September for a United Nations meeting on non-communicable diseases. It is expected that a response plan to worldwide obesity will be discussed in order to respond to the increased prevalence of health conditions linked to obesity.

A summary of the article in the August 27th issue of The Lancet is available online at: http://www.thelancet.com/journals/lancet/article/PIIS0140-6736(11)60813-1/abstract. Additional information: http://www.pbs.org/newshour/rundown/2011/08/obesity-rates-rising-worldwide-us-could-hit-50-by-2030.html