Overeating May Be Learned In Infancy, Study Says 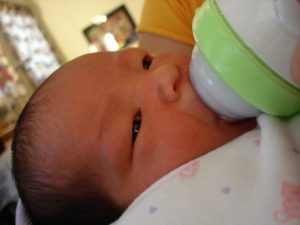 Encouraging babies to eat before bed or to finish a bottle might be setting them up for bad habits later in life, a new study suggests.

Researchers at Brigham Young University found that obesity rates in babies at 24 months could be traced back to feeding habits learned in the first few months of life.

For the study, researchers Ben Gibbs and Renata Forste analyzed data from more than 8,000 families, finding that babies who were fed mostly formula were 2.5 times more likely to become obese as toddlers than babies who were breastfed during the first six months of life.

But the results go beyond the idea that breastfeeding is healthy, the researchers say – and it has to do with how babies control and monitor their own hunger instincts. Babies put to bed with a bottle had a 36 percent higher risk of childhood obesity, while those who were introduced to solid foods too soon saw an increased obesity risk of 40 percent.

“Developing this pattern of needing to eat before you go to sleep, those kinds of things discourage children from monitoring their own eating patterns so they can self-regulate,” Forste said.

Even parents who use formula instead of breast milk can help their children develop healthy eating habits, the researchers say.

“When a child is full and pushes away, stop! Don’t encourage them to finish the whole bottle,” Forste said.

Forste will next work on evaluating the link between breastfeeding and cognitive development in early childhood, noting that the earliest months of life are “very critical” for establishing healthy pattens.

“The health community is looking to the origins of the obesity epidemic, and more and more, scholars are looking toward early childhood,” Gibbs said.

The study is published in the journal Pediatric Obesity.