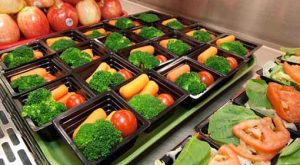 The state of Colorado is considering a ban on trans-fats in school cafeterias that would result in the most stringent nutrition guidelines in America.

The bill which will effectively ban the presence of trans-fats in any food served at school is due to go before a Colorado House committee later in the week. While other states have limited or banned trans-fats in food served in school cafeterias, Colorado is the first to include trans-fats found in vending machine food, bake sale items, and “a la carte” offerings such as ice cream or pizza.

If the bill is approved, the comprehensive ban on trans-fats would take place at the beginning of the next school year. Any food available in Colorado schools would have to be produced without the use of unhealthy trans-fats.

At this time, Colorado is considered to be the “thinnest” state in the country with the nation’s lowest obesity rate. However, the state does have one of the highest rates of childhood obesity, indicating that there needs to be a greater focus on healthy eating among children. Between 2007 and 2010, Colorado’s childhood obesity rate went from being ranked number 3 to number 23 among American states. Experts blame the problem on childhood poverty and an increase in sedentary behavior.

Supporters of the bill point out that the ban on trans-fats would not alter the variety of food available to Colorado school children, and that there would be no need to make expensive changes to school kitchens where the food is prepared. The only difference would involve modifying the preparation of certain food items, in order to avoid the use of any trans-fats.

The consumption of trans-fats is associated with the development of obesity related illnesses such as coronary heart disease.