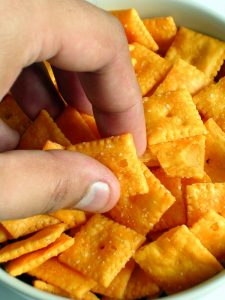 A study published in The Journal of Nutrition has determined that Americans are consuming too many calories, by constant grazing on supposedly healthy snacks.

The study determined that people eat nutritious snacks not only because of the good taste, but also because they are motivated by the belief that the snacks are good for them.

Nutritionists have long recommended consuming smaller meals more frequently in order to maintain regular blood sugar levels, instead of 3 larger main meals. It is believed that keeping the body supplied with small amounts of food throughout the day may assist in increasing metabolism, and burning more calories. The theory was put to the test, by recommendations that the total daily calories for a person be split between 5 or 6 small meals, which should be consumed approximately 3 – 4 hours apart.

Unfortunately, many people found themselves adding the extra 2 – 3 snack sized meals to their regular caloric intake. This resulted in a considerable amount of overeating, followed by weight gain.

The study notes that roughly a quarter of the calories consumed each day by Americans, are from eating snacks. The easy availability of snack foods in our consumer driven society is promoting overeating, especially when combined with high-calorie regular foods. Often, conveniently packaged snacks contain large quantities of fat, sugar, and sodium. Special snack sized packaging may leave people wanting more, and inadvertently consuming a larger number of calories than they would, by eating a larger quantity of a healthy food.

The study is especially interesting, when one considers that in the US, the percentage of calories eaten in snacks that make up a person’s total caloric intake for the day has increased 41 percent in the last 20 years.

Source: The Journal of Nutrition