Night Snacking Puts On The Pounds More Than Daytime Munchies 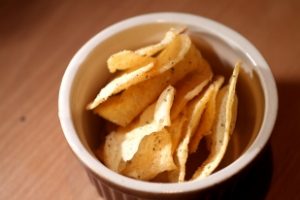 In accordance with the idea that you shouldn’t eat dinner past 7 p.m. if you don’t want to gain weight, a new study suggests that night snacking can make you put on more fat than nibbling during the day.

According to emerging research, when the body’s normal sleep-wake cycle is disrupted by requiring the metabolism to work when it wants to be resting, weight gain can ensue – even when caloric intake doesn’t change. Put simply, it’s not so much what you eat, but when you eat that matters.

The study, published in Current Biology, found that mice who were forced to eat during the day – when they would normally be sleeping, as they’re nocturnal animals – put on more fat. They were less responsive to insulin, which helps the body use sugar as energy. When the sugar is not used, however, it is stored as fat.

Researchers say this might explain why other studies have shown that night-shift workers are more likely to be obese and develop diabetes.

“Disrupting your biological clock leads to a disruption of metabolism such that there’s more of a tendency to put on fat,” said study co-author Carl Johnson, a chronobiologist at Vanderbilt University.

For humans, the study implies that avoiding late-night snacking can help keep unwanted pounds at bay – in addition to diabetes and heart disease.

“This paper for the first time conclusively shows there is a circadian rhythm in insulin sensitivity in animals and potentially in humans as well,” said Satchidananda Panda, a biologist at the Salk Institute in La Jolla, Calif.