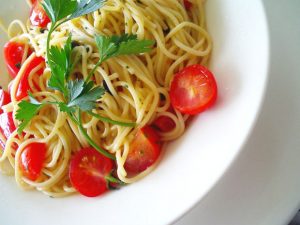 Being sleep-deprived can make you ravenous, according to a new study from the University of Pennsylvania.

Researchers found that people who are up late at night tend to spend more time in the kitchen and are more likely to gain weight than people with good sleep patterns.

The study’s findings add to the growing body of research that suggests eating past a certain time at night affects delicate processes that control weight – like insulin sensitivity and hormonal balance.

Participants in the study who were kept up until 4 a.m. in a sleep lab ended up consuming more than 550 additional calories during late-night hours than those who slept normally.

“People consumed a substantial amount of calories during those late-night hours when they would normally be in bed,” said study author Andrea Spaeth, a doctoral candidate in the psychology department at the University of Pennsylvania. “Those calories also were higher in fat compared to the calories consumed at other times of day.”

The study included about 200 people who, for five days straight, were asked to stay awake until the wee hours of the morning and then only allowed four hours of sleep. The participants were allowed to eat whatever they wanted.

Then the researchers compared the sleep-deprived individuals’ food intake and weight gain to individuals in a control group that were given the same food choices and who were allowed to get a good night’s sleep.

“The only difference between the two groups was sleep,” Spaeth said. “They lived in a suite, and in the suite there was a kitchen with a fridge and microwave.”

While the eating habits of the control group didn’t change, the group that was sleep-deprived usually began eating more between 10 p.m. and 4 a.m. Not only that, but they ate more unhealthy, fattier foods.

The study authors note that many studies on the sleep-weight gain topic tend to rely on self-reported statistics.

“It’s amazing how much food a person can eat and not remember,” Dr. W. Christopher Winter, medical director of the Martha Jefferson Sleep Medicine Center in Charlottesville, Va, told Health Magazine. “It’s hard to keep track of people in terms of their eating and in terms of their sleep. When people are in a lab, they can perfectly control conditions and report them.”

All of the participants in the study also only had access to hospital food, leaving the researchers to wonder how the results would have differed had the subjects been able to indulge in their favorite snacks.

More information about the study can be found in the journal Sleep.