Were Models Too Thin In Milan Fashion Week? 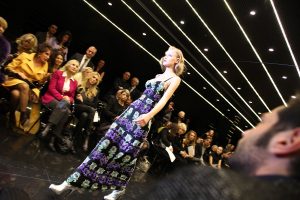 Armani has recently come under scrutiny for sending models down the runway who appeared to be exceptionally thin during Milan Fashion Week.

Changes in the fashion industry over the last decade or so have moved toward a healthier body image ideal. In 2006, models who had a body mass index of 18 or under were banned from Madrid Fashion Week, yet the Armani show models appeared to be well below the standards for having a healthy BMI.

“I love your designs, always have and will,” wrote one Twitter user. “But please allow your models to EAT – it’s so hard to look at with their bones exposed.”

As Hollywood Life’s Shira Benozilio suggests, models should not necessarily be judged on how skinny they are – being thin tends to come with the territory – but how healthy they are.

“I draw the line at health,” Benozilio said. “Without jumping to conclusions, the models walking down the Armani catwalk did not seem to have a body mass index of at least 18. They were so thin that guests in the audience were reported to be taken aback.”

In 2012, Vogue banned models under 16 years old who apppear to have an eating disorder from being featured in their magazine.