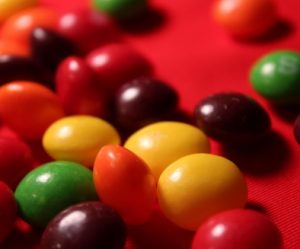 While mindless snacking tends to be common when we’re in front of the TV, a new study suggests that what we’re watching could influence our eating habits, too.

Researchers from the Cornell Food and Brand Lab found that people who watched action movies ate almost twice as much food as individuals who watched an interview program.

A total of 94 undergraduate students were split into three groups to watch 20 minutes of TV. One group was assigned to watch an excerpt from the action movie “The Island,” a second group watched the same excerpt without the sound, and a third group watched a segment of “The Charlie Rose Show.”

“The participants were provided with M&Ms, cookies, carrots and grapes to snack on while watching the shows,” CBS News reports. “The investigators weighed the snacks before and after the initial part of the experiment to see how much the people in each group had eaten.”

“More stimulating programs that are fast paced, include many camera cuts, really draw you in and distract you from what you are eating,” said study author Aner Tal, a post-doctoral research associate in the Food and Brand Lab at Cornell University. “They can make you eat more because you’re paying less attention to how much you are putting in your mouth.”

According to Brian Wansick, lab director, it’s more about what’s in front of you that will determine food choices while watching television.