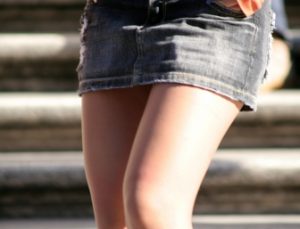 A quick Google search for “thigh gap” returns a plethora of results, including an article titled, “How to Get the Thigh Gap,” and a Tumblr page called “Do it for the Thigh Gap.”

But what is the thigh gap? The latest obsession for teen girls, it seems, and yet another unrealistic body image standard that most average-sized females can’t live up to.

The thigh gap refers to the space between the thighs that can be observed when a girl is standing with her feet together. Skinny women have it, and girls all over the globe, it seems, are now wanting it — badly.

“Good Morning America” recently sat down with four high school juniors who explained the thigh gap phenomenon and what it means for modern teen girls. Catching on with social media sites like Tumblr, the thigh gap is truly going viral.

“I see those pictures on Tumblr and stuff and I think that wow, like, they look so good,” said Angela DePalma, 16, a student from the New Jersey Chapter of Students Against Destructive Decisions. “And then I realize how unhealthy that is.”

Teen psychologist Barbara Greenberg says that even if teen girls are able to achieve the thigh gap, it will be difficult for most to maintain it, “setting themselves up for not only an unattainable goal but for an unsustainable goal.”

One blogger, who calls herself “Matchstick Molly,” suggests that girls avoid exercises like squats, lunges, leg curls — even the treadmill — if they want to achieve the thigh gap. But other health experts say that body shape is influenced more by genetics than anything else, and that some women may be unable to exercise themselves toward a thigh gap, no matter how hard they try.

Despite it being an unrealistic ideal, however, DePalma and her friends say that most girls they know will still strive for the thigh gap in order to achieve popularity and status among their peers.