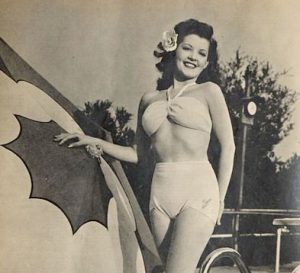 While Barbie may have gotten a realistic makeover, a model featured on Target’s website recently was victim to some awful Photoshop editing that made her look like she was missing body parts.

In what was likely a nod toward the current “thigh gap” obsession, the model’s image
in Target’s ad appears to have been slimmed down between the legs – so much so that a chunk of the swimsuit between her legs is missing.

First spotted by Ethical Adam, the “Xhilaration® Junior’s Midkini 2-Piece Swimsuit – Leopard Print” looks like a normal bikini on a normal model, until further inspection: Not only is part of the model’s underwear missing, but her front arm also appears to be unnaturally elongated and slimmed down.

“What were they thinking?” wrote Ethical Adam. “This swimsuit from Target is featured on their site with some of the worst Photoshop ‘slimming’ you will see today.”

The company has since issued an apology about the Photoshop debacle, stating that it was “an unfortunate error on our part.” They have removed the image in question and are “working on getting a new image up there.”

While the apology was a smart move, many people say the mistake shouldn’t have happened in the first place and that these types of editing blunders are the reason why young girls are faced with such immense pressure to look a way that is all but impossible to achieve – unless you can Photoshop yourself, that is.

“This is what is being marketed and pushed on young girls – this absurd image of a crotch that absolutely does not and cannot happen naturally,” wrote Jezebel’s Rebecca Rose. “This what young girls have to look at and try to reconcile with their own, normally shaped bodies.”