“Meatier” Mannequins: Coming To A Department Store Near You? 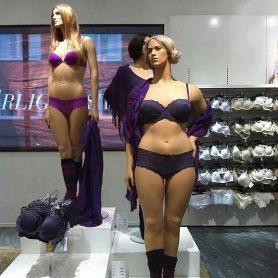 Department store mannequins may be getting a makeover soon.

A Swedish retail establishment made social media waves recently when a picture of two fuller-figured female mannequins clad in matching bras and panties popped up on the Internet. The photo appeared last week on the Facebook page of Women’s Rights News.

The caption of the photo says, “Store mannequins in Sweden. They look like real women. The US should invest in some of these.”

According to the LA Times, other countries, like Spain, have responded to public backlash over too-thin fashion dummies by replacing them with meatier models.

Gap has come under scrutiny in recent years for using mannequins shoppers described as “dangerously emaciated.”

One Florida woman named Dae Sheridan asked J.C. Penny to get rid of dummies whose legs were the same size as her arms, describing them as “two malnourished poles with jeans on them.”

“Nobody notices because of the saturation of an unrealistic thin-ideal and beauty standard in our culture which teaches girls and women to attempt to ‘achieve’ impossible proportions,” Sheridan wrote in a petition on Change.org.