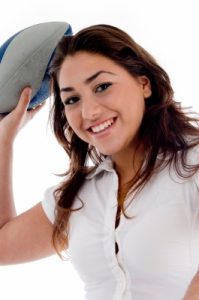 Rugby is traditionally considered a male-dominated sport, but the Harvard women’s rugby team is on a mission to show that strong can indeed be beautiful and feminine.

In a series of photos accompanied by an essay in the Harvard Political Review, the team showed off their near-bare bodies – which had words like “fearless,” “strong” and “ripped” written on them.

“We had devised the premise of writing what we loved about each other and photographing it, but that’s all the direction we gave our teammates on what and how to write,” Shelby Lin, recent graduate, told Today.com.

The problem for female athletes

Women on the team said that conversations about body positivity are common among them, and they wanted to help spread the message to young females who are involved with sports.

“Female athletes often struggle to balance social expectations to be delicate and feminine with the demands of athletics to be strong and powerful,” said player Helen Clark. “Our team reconciles this by reminding each other every chance we get that our strength is beautiful.”

Historically, Clark said, women are taught that being feminine is equated with being beautiful, but being strong is not.

The team held the photo shoot back in May, and the idea was conceived partly by team captain Brooke Kantor.

“This, to me, is extremely important, because in a society where eating disorders among women are extremely prevalent, I feel so lucky to be surrounded by a group of females who have a positive relationship with food,” Kantor said. “We unabashedly LOVE to eat!”