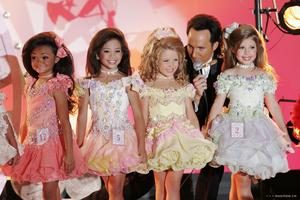 Growing fears about the hypersexualization of young girls has prompted the French Senate to vote for a ban against child beauty pageants.

The upper house of Parliament voted Wednesday to illegalize the practice for girls under the age of 16 – a move that has been in the making since Paris Vogue published photos of a 13-year-old girl dressed in high-fashion clothes and makeup in its December 2010 issue. The issue also featured several other young girls clad in ball gowns, high heels and revealing clothing.

Vogue defended the photos, saying that they merely represented every young girl’s desire to dress like her mother, but proponents of the pageant ban say that forcing womanhood on children is dangerous and demeaning.

“It is extremely destructive for a girl between the age of 6 and 12 to hear her mother say that what’s important for her is to be beautiful,” said Chantal Jouanno, former sports minister. “We are fighting to say: What counts is what they have in their brains.”

In her report, Against Hyper-Sexualization: A New Fight for Equality, Jouanno calls for French government to not only outlaw pageants, but to ban young models from advertising campaigns.

While some French child beauty pageants prohibit bathing suit competitions, most mirror what Americans see in reality shows like “Toddlers and Tiaras” – girls who should still be playing in the sandbox parading around in adult-like clothing and posing seductively for a panel of judges.

Yet Michel Le Parmentier, who organizes France’s Mini-Miss pageant, says that his contests, which already ban makeup and swimsuits, aim for a “fairy-tale princess” look more than anything else.

“I wanted to organize a contest which respected the child,” Chevalier told the New York Times. “[People] look at beauty contests on TV and in the U.S. where contests aren’t adapted to children. They think that children parade on a stage to look like a Barbie.”

While pageants may not be the root of the problem, Jouanno says that girls are being disguised as “sexual candy,” a practice that is “contrary to the dignity of being human.”

Child-size adult clothing, like padded bras and high heels, also need to go, she argues. Otherwise, the “normalization” of pornographic images will become acceptable in French culture and cause psychological damage to vulnerable young women.

Before becoming a law, the pageant ban bill must be passed by the National Assembly. If enacted, organizers of pageants who enroll young girls may face jail time of up to two years and a fine of 30,000 euros.

“We have a great responsibility as both politicians and parents,” Jouanno wrote. “Let us not make our girls believe from a very young age that their worth is only judged by their appearance.”