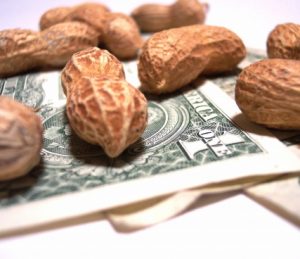 When it comes to college students, basic survival concerns that have to do with food and money may be intricately linked, according to new research from the University of Southhampton.

The study, which included over 400 undergraduate students from various U.K. universities, found that females especially are more likely to suffer from an eating disorder if they experience financial difficulties.

“There may be a ‘vicious cycle’ for these students, where negative attitudes towards eating increase the risk of financial difficulties in the short term, and those difficulties further exacerbate negative eating attitudes in the longer term,” said Dr. Thomas Richardson, lead author of the study.

A matter of control?

The students were surveyed through a tool called the Eating Attitudes Test (EAT), which measured their responses on subjects like body image, disordered eating habits or feelings about food.

The students took the EAT up to four times, with three to four months in between each testing period.

Researchers found was that more extreme financial difficulties were associated with more problematic attitudes about food and eating for females. Women who had high baseline scores on the EAT (which indicated disordered eating attitudes or behaviors) were more likely to experience financial stressors in subsequent rounds of the surveys.

According to Richardson, the link between finances and eating disorders may have something to do with control, yet more research is needed to explore the association further.

“It may be that those at higher risk of having an eating disorder feel like they have no control over events in their life, such as their financial situation, and they may then restrict their eating as a way of exercising control in other areas of their life,” he said.