Controversial New Device Allows You To Manually Empty Your Stomach 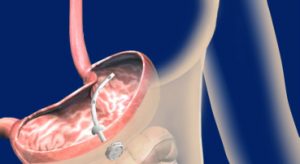 The start of a new year always brings with it a wide variety of diets and fads aimed at helping people lose weight.

But the latest one–a gadget that sucks food out of the stomach–seems to be crossing the line into dangerous territory.

The device, made by Dean Kamen and Aspire Bariatrics, is called the ApsireAssist®, or “A-Tube,” and it “allows patients to remove about 30 percent of the food from the stomach before the calories are absorbed into the body, causing weight loss,” according to Aspire Bariatrics.

Hook up a tube, get skinny?

The therapy starts with a patient getting a tube placed in the stomach, which connects to a “poker chip sized Skin-Port on the outside of the abdomen.” The Skin-Port has a valve-like function, which patients can open up and connect to a handheld device that empties the contents of the stomach.

Patients can eat and drink normally, and then simply flush it out afterwards. If it sounds reminiscent of bulimia, it is. And while the device makers are promoting it as a weight-management solution for the morbidly obese, the availability of it for people of average weight–or those with eating disorders–seems to be a clear concern.

Beyond the obvious controversial nature of the device, initial problems seem to revolve around the device not being able to suck up certain foods, causing clogging. One patient reported having to avoid things like cauliflower, broccoli, pretzels and chips.

Makers of the device hope to use it as an alternative to gastric bypass surgery.

Critics, however, note obvious potential problems, such as poor nutrient absorption, anemia and infections, to name a few.