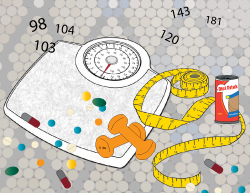 How Pediatric Doctors Plan to Help

Recently a set of guidelines was released by the American Academy of Pediatrics the guidelines are to help doctors recognize a potential for and or an eating disorder in their patients.

Parents are encouraged to talk to their children about body imagine and to avoid words such as fat, tubby or any word that would put the idea in their child’s head they are over weight or fat.