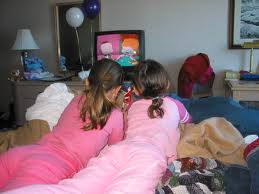 In a recent article I wrote about how watching television can cause eating disorders. The study was performed by Harvard Medical School. It showed that some girls develop a distorted body image caused by watching thin beautiful girls and women on television therefore, creating an eating disorder in some of these television watching girls.

What is even more disturbing is a new study that proves girls who have friends that watch TV and not necessarily watch it themselves have a 60% greater risk of developing an eating disorder themselves.

Anne Becker was in charge of the study. What she found was as tourism and modern technology began to enter the country in the mid 90’s when the government approved the use of broadcast television the girls started to develop eating disorders.

What was discovered after 500 girls were interviewed several times and numerous physiological tests done was that it all depended on how a girl’s peer group watched TV it did not matter whether the girl watched TV at all. The findings make both groups of girls imagine (internalize) the slender images they either see or hear about. Which can and has led to an eating disorder.