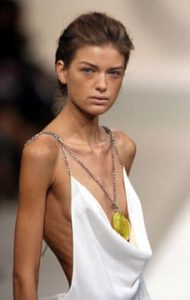 You’re standing in line at the grocery store unloading your groceries onto the conveyor, surrounded by glossy magazine covers. Each magazine features a Photoshopped image of an exceptionally thin model. We are surrounded by these images everyday.

Critics have long worried that constant exposure to images of overly thin models gives us unrealistic expectations for our own bodies, contributing to anxiety and even eating disorders. So should the fashion industry regulate the types of bodies that they promote? Should they require models to be of a certain weight before they can strut down the catwalk and pose for magazines?

OpposingViews.com recently polled its viewers to see where they stood on the issue. Between August 6th and August 27th OpposingViews asked readers: Should there be a minimum weight for professional models? More than 3,200 responded, and the results were split almost directly down the middle. 45.3 % of OpposingViews readers said yes, there should be a minimum weight for professional models. And 44.4% of readers said no, there should not be a weight limit. 10.3% responded saying that they had no opinion on the matter.

The question has been hotly debated worldwide for years and different countries are responding in a variety of ways:

These changes could be the beginning of drastic change for the fashion industry.

It will be interesting to see if other fashion magazines will follow Vogue’s lead and regulate the size of their models. If this poll is any indication, the public remains divided on the issue and changes in the industry may be slow to come.