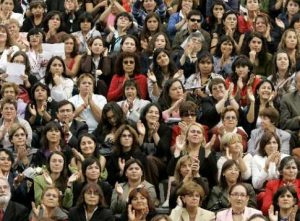 Regardless of Age the Behavior is the Same

The treatment for a woman in 50s with an eating disorder is the same for a sixteen-year-old girl with the same eating disorder. Once the mind (regardless of the age) develops a distorted body image, it goes with it. Doctors are concerned about older women with eating disorders getting treatment. As a woman ages she is more able to hide the disease. On the outside she is able to be fully functional and in most cases completely in control of her secret. It is when the woman starts to lose massive amounts of weight that someone notices there may be a problem. Unlike teenagers who are also good at hiding an eating disorder their bodies, succumb to the effects of the eating disorder quicker than a mature woman body.

In most cases, a mature woman will have to hit rock bottom before she seeks treatment and hitting rock bottom can be as painful as a broken leg, pelvis, arm or any other body part that can easily be broken once the woman’s body starts to break down.