Internet Can Be A Foe To Those With Eating Disorders 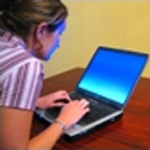 One woman shares how at one time the internet kept her anorexia, but now she is turning it around with her own website to help others recover:

“There was a time when Sharon Hodgson would spend up to eight hours a day combing eating disorder websites for tips and moral support in her quest to carve off a few more pounds.

A “roller-coaster dieter” who became painfully thin in high school and reacted to weight-gain in her 20s by dropping more than 70 pounds in one year, she says “pro-ana” (pro-anorexia) online communities warp the reality of their members.

“If you are only talking to people who are starving themselves and engaging in extreme dieting, after a certain point, you start to normalize that. You start thinking that these people are normal, that you are normal,” says the Halifax resident, now 33 and recovered from her eating disorder. “They start to think that those pictures of emaciated women are a true indicator of what women look like, so of course the person looking at them feels fat.””