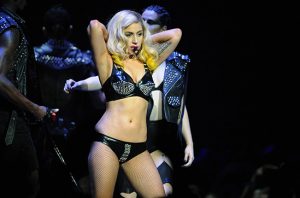 Lady Gaga has recently been criticized in the tabloids for her weight gain. While she is still a very normal weight and beautiful, the media attacked her.

In response to critics, Gaga revealed that she has been suffering from “bulimia and anorexia since [she] was 15.”

Most would agree that Gaga’s new curvy look is much more appealing than her emaciated frame of the past, but critics continue to attack her for “piling on the pounds.”

Lady Gaga has recently gained about 25 pounds during her tour due to stress. From the looks of her photos, she can’t weigh more than 120 or 130 pounds, but compared to her previously low weight, it is noticeable.

The “Born This Way Foundation”

To defend herself, Gaga and her mother created the “Born This Way Foundation” to inspire “bravery” in young girls and to make her fans proud of their bodies. She wants users to share photos of themselves on her website to celebrate their triumph over insecurities.

Gaga’s “Little Monsters,” the affectionate name she has for her fans, have been posting photos and stories of their triumphs over anorexia since the site went live this week. The monsters can relate to Gaga’s pressure to stay thin and are inspired by her defending the weight gain.

Despite the attacks, Gaga is proud of her fuller figure. She claims she “doesn’t feel bad about it, not even for a second. I have to be on such a strict diet constantly. It’s hard because it’s a quite vigorous show, so I tend to bulk up, get muscular.”

Good for you, Gaga! Be proud of your body.