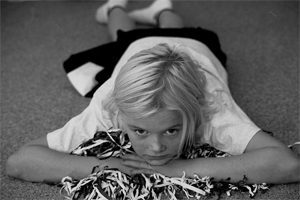 A recent report shows that eating disorders are rising in young children at alarming rates:

“”I always wanted to be the good girl. Good girls are skinny and happy. The bad girls are the fat ones.”

That was the explanation a recent visitor to the Alliance for Eating Disorders Awareness in West Palm Beach, Fla. gave when asked why she starved herself to the point of hospitalization. She was eleven years old.

Anorexia and its sister-disorder, bulimia, have historically been thought of as striking white, middle to upper class teenage girls. But a recent report from the American Academy of Pediatrics warns doctors that eating disorders are happening to younger girls — and boys — at an alarming rate.

“People tend to have this idea of who gets eating disorders, but an eating disorder doesn’t discriminate between age, gender, race, or class,” says Johanna Kandel, founder and director of the alliance.

“Some research says that as much as ten percent of those with eating disorders are under the age of ten. What I’m finding at the alliance is that the number of parents seeking help for their 7-, 8-, 9-year-olds is escalating rapidly,” she says.”