A Fussy Eater Does NOT Mean An Eating Disorder Is Developing 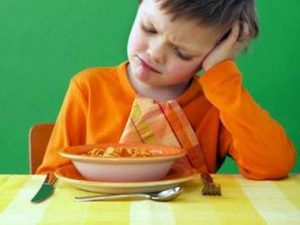 In an effort to find out what creates unhealthy eating patterns among children, researchers from University College London compared children’s eating behaviors to their mothers’ reactions to certain behaviors and found that parents are usually responding to (not the cause of) fussy eating or overindulgence.

Researchers collected data from 244 mothers of children between the ages of seven and nine. The mothers filled out one survey related to their children’s eating habits, agreeing or disagreeing to statements that measured how a child responds to food “(for instance, “If allowed to, my child would eat too much”), their child’s enjoyment of food, and whether their child ever avoids food (for instance, “My child gets full before his/her meal is finished” and “My child takes more than 30 minutes to finish a meal.”). The second survey related to the mother’s feeding habits, agreeing or disagreeing to statements like “If my child says ‘I’m not hungry’ I try to get him/her to eat anyway,” or “If I did not guide or regulate my child’s eating, he/she would eat too much of his/her favorite foods.”

Laura Webber, a doctoral student in the Health Behavior Research Centre at University College London and lead author of the study, says “that most likely the child’s behavior is driving, not responding to, her mother’s reaction. Eating behaviors are usually inherited, Webber says, so chances are, a fussy eater isn’t being fussy simply to get a rise out of her mother (or overeating just because she was told not to).

Fussy eating habits in many cases are nothing more than a phase as the child grows so will their taste buds and they will be more likely to try new foods. As for a fussy eater developing an eating disorder there is no evidence that a fussy eater or an over eater will develop any type of eating disorder as a result of their food preferences.