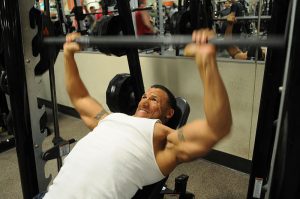 Men who use dietary supplements to enhance their exercise performance or their physique may have a largely unexplored eating disorder, according to new research.

The study, “Excessive Workout Supplement Use: An Emerging Eating Disorder in Men,” was conducted by a team from Alliant International University, and it revealed that males could be suffering more from body image pressures than is accounted for in current research.

The use of legal appearance and performance-enhancing drugs (APED) is on the rise among men and may be fueling eating pathologies, researchers reported.

“Masculine body image ideals often remain unaccounted for in body image and eating disorder research which predominantly conceptualizes these issues based on a drive for thinness, rather than simultaneous drives toward being both lean and muscular,” the researchers wrote.

The quest for masculinity

The study included nearly 200 men who had taken at least one performance-enhancing or dietary supplement in the previous 30 days.

Researchers found that body dissatisfaction was indeed linked to “risky body change behaviors” that were rooted in the desire to achieve some type of cultural standard of attractiveness.

The study also found the subjects’ sense of masculinity – or lack thereof – was linked to the degree of their supplement use or body changing behaviors.

“The way in which men’s bodies are being objectified by the media is catching up rapidly to what has been done to women’s bodies for decades,” said study co-author Richard Achiro.

About one-third of the participants felt they overuse dietary supplements, and some even said they did so despite being warned about the risks from their doctors.

“Men are using the supplements in a way that is risky both to their physical health and their health in terms of relationships and their own emotional wellbeing,” Achiro said. “It is an expression, or variance, of eating disorder behavior in these men.”