Yoplait Pulls Ad That Promoted An Unhealthy Relationship With Food 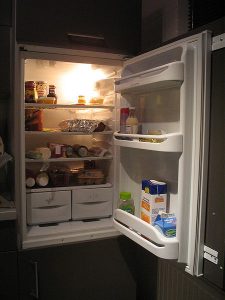 Under pressure from the National Eating Disorder Association (NEDA), Yoplait has pulled a television ad that critics claim promotes an unhealthy relationship with food and could trigger those vulnerable to eating disorders.

In the ad a woman stands before a refrigerator while contemplating eating a slice of cheescake. She begins an inner monologue in which she begins to barter with herself to justify eating the dessert. To some this may seem innocuous enough, perhaps even similar to how some people regularly talk to themselves about food. But the conversation boarders on dysfunctional, as evidenced by the fact that people who are in recovery from eating disorders say that the ad dialogue mirrors how they used to think about food.

The woman in the ad categorizes the cheescake as “bad” and then says that she has been “good” and deserves it. She then goes on to barter with herself the size of slice she will consume, and how she will perhaps run in place while eating it or follow it with sticks of celery to counterbalance its consumption.

Many people with eating disorders have similar “black and white” thinking in which they categorize food as either “good” or “bad” but for them, most food eventually ends up in the “bad” category.

NEDA applauds Yoplait for it’s move to remove the ad from television. Representatives from the yogurt company claim that they never thought that this ad portrayed a negative relationship with food nor that it could negatively impact those susceptible to eating disorders. Sadly, this may be a sign of how very ingrained the way the American public thinks about food is.

Experts say that it is important to remember that there are no “good” or “bad” foods and that all foods can and should be eaten in moderation. This ad seems to have highlighted the obsession many people have with food and how very close what is perceived as normal or mainstream could be to that which is dysfunctional and dangerous.