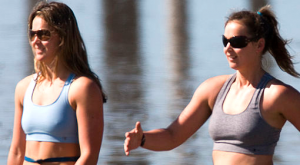 Developing – and sticking to – healthy habits can be challenging, especially while dealing with or recovering from an eating disorder.

But a new study shows that going at it with a friend can increase your success rate to an almost no-fail status.

ExerciseFriends.com conducted a study to analyze the habits of 25 to 65-year-old Americans. It found that more than half of people who diet have tried more than five different eating programs by the time they reach 40. And in about 93 percent of cases, these diets fail and weight lost is gained back.

According to the study, more than 45 million Americans try dieting every year, but doing it alone – or trying to stick with a solo exercise program – fails about 95 percent of the time.

Having a partner to hold you accountable, the study found, raised success rates of both exercising and dieting to more than 95 percent. The people in the study who had health “buddies” also tended to keep the weight off.

The idea of accountability in exercise programs isn’t new – the study also found that 89 percent of people who hire a personal trainer do so to force themselves to show up – but this new research confirms that the buddy system also works with dieting.

Patrick McCluskey, founder of ExerciseFriends.com notes: “Our members know diets fail and working out fails – not because these are not important but because motivation wanes. They understand the value of accountability partners who motivate each other to achieve the goal.”