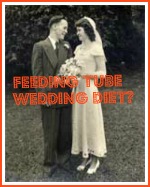 It is not uncommon practice for brides-to-be to adopt a slimming diet in order to fit into their wedding dress on the big day. However, reports of a controversial new fad diet being offered to brides in Florida have experts both puzzled and concerned.

According to the New York Times, some women are opting for an extreme procedure called the “K-E diet” that is available through the clinic of Dr. Oliver R. Di Pietro.

The procedure which costs $1,500 involves feeding the person a protein-rich, carbohydrate free formula via a nasogastric (NG) tube that is placed through the nose, down the esophagus, and into the stomach. The extreme diet restricts the individual to just 800 calories per day, and is continued for a period of 10 days.

Women who undergo the procedure lose weight rapidly due to a process called ketosis in which the body breaks down fat for energy in the absence of sugar and carbohydrates. Ketosis results in a number of undesirable side effects including bad breath, dizziness, and constipation. Individuals who elect to undergo the procedure are carefully monitored by Dr. Di Pietro.

Experts have expressed surprise that individuals would want to resort to the use of an NG tube in order to lose weight. There is also concern that the diet itself can result in potential risk to a person’s health. Most of the weight lost during crash diets is in the form of water or muscle mass which is quickly gained back once normal eating patterns resume.

Doctors have also noted that long-term high protein diets that restrict calories may cause nutritional deficiencies, thyroid problems, heart trouble, and a slower metabolism which makes it easier to gain weight in the future. There is also the possibility that something could go wrong triggering a medical emergency; just what a bride doesn’t need on her wedding day.