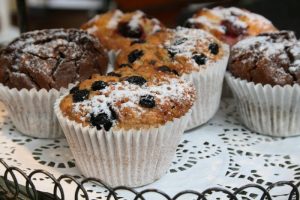 A new Israeli study to be published in an upcoming edition of the journal Steroids has suggested that obese and overweight individuals who wish to lose weight may benefit from adding a small dessert to their breakfast meal.

The study involved 193 obese persons between the ages of 20 to 65. The participants were divided into 2 groups, and provided one of two different diets to follow. The diets were virtually identical except that one contained a low carbohydrate breakfast, whereas the other added the choice of a small dessert portion to a high carbohydrate protein-enriched breakfast.

Participants in the study were also administered blood tests at regular intervals in order to determine levels of ghrelin, an appetite stimulating hormone.

The researchers examined the progress of both groups after 16 weeks on one of the two diets. They determined that participants in both groups lost a similar amount of weight. Individuals in the low carbohydrate group tended to lose on average about 33 pounds, compared with those in the protein-enriched diet with added dessert who lost approximately 30 pounds.

However, after 32 weeks, the low carbohydrate group had regained 25 pounds as opposed to the group that ate the protein-enriched breakfast with dessert, who tended to gain back only 15 pounds.

Researchers theorize that the participants in the group that ate the high carbohydrate protein-enriched diet with dessert gained back fewer pounds because they felt more satisfied and experienced fewer cravings. Hormone levels of ghrelin were reduced by 45 percent among participants in the protein-enriched breakfast group, compared with a 29.5 percent reduction in ghrelin among those in the low carbohydrate breakfast group.

This short-term study has been criticized by some researchers who point out that it was more likely the addition of protein-enriched foods for breakfast that resulted in reduced hunger cravings, not the dessert. They recommend increasing protein and fiber for breakfast in order to reduce hunger and avoid the temptation to snack between meals.