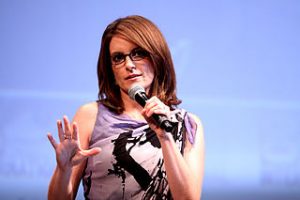 After losing 30 pounds in the late ’90s, comedian and actress Tina Fey rose to the top of the fame ladder with the highly successful show “30 Rock.”

But today Fey says that maintaining a certain body ideal is the last thing on her mind – and she’s careful about promoting healthy standards for her two young daughters.

“I try not to speak badly about my own body or food things in front of them,” Fey said in the April 2013 issue of Ladies Home Journal. “And I never talk to them about their bodies in terms of anything but being healthy.”

Fey says that while she tries to protect her children from negative body talk, there will always be outside influences that creep in.

“Last winter Alice wanted to eat more and more holiday candy,” Fey said. “I said, ‘Pace yourself, I don’t want you to throw up.’ I said that because I was a big barfer as a kid.”

That’s when she realized that no matter how much she tries to guide her children in a certain direction, “they will always encounter other people’s weird messages,” she said.

Unlike many celebrities who speak out against size-zero models or editing images in magazines, Fey says the fashion industry isn’t to blame for negative body image problems.

As for her own body image, Fey says she doesn’t weigh herself, preferring to gauge her size by how clothes fit.

“I try not to participate too much in the incredible amount of wasted energy that women have around dealing with food.”