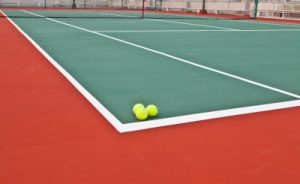 According to ABC, Seles is a paid spokesperson for Shire Pharmaceuticals, maker of Vyvanase, the recently FDA-approved and first drug to treat binge eating disorder.

To raise awareness about binge eating disorder, Seles opened up about her past struggles and how she overcame the condition.

“My binge-eating episodes would usually happen in the evenings when I would be back by myself after a long day at the tennis courts and would just eat large quantities of food,” Seles said in a Shire Pharmaceuticals PSA spot. “My eating was just uncontrollable. Once the binge was over I felt so upset with myself.”

Seles says her disorder was ‘out of control’

Despite being “so controlling” on the tennis court, Seles said her eating was one area she could not get a handle on.

The behavior was rooted in the pressures of being a star athlete and an incident where she was stabbed on the tennis court, among other things, Seles told People.

“I look at my life and how many years I wasted by being shamed about it, hiding it from my family and friends and doing my binges in private … now there’s help out there,” she said.

The turning point for Seles was a friend’s wedding, where multiple fittings for a bridesmaid’s dress made her realize how much her weight was fluctuating.

“There’s help out there. You don’t have to suffer in silence like I did for so many years.”