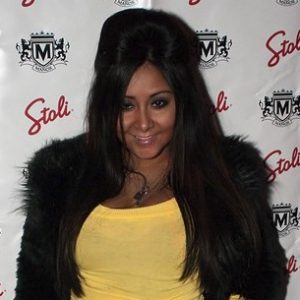 “Jersey Shore” star and new mother “Snooki” Nicole Polizzi says that her toned, post-baby body is the result of working her you-know-what off at the gym — not an eating disorder.

A recent report in Star magazine alleged that Snooki’s dramatic weight loss of 42 pounds may have happened because of anorexia. Claims that she looked “emaciated” and that “all she eats is lettuce and egg whites” were also reported. The star apparently battled anorexia during her teen years.

She then addressed the magazine directly, saying, “Star mag, shame on u for that RIDICULOUS article. I literally worked my ass off in the gym for my toned, HEALTHY body.”

And while promoting her new music label, Team Snooki Music, she made light of the situation, flexing her muscle and asking, “Does this look anorexic to you?”

After giving birth to her baby boy Lorenzo, Snooki says she adopted healthy habits, noting that the tabloid accusations about her having an eating disorder are “hysterical.”

“I go to gym five days a week and I eat healthy,” she added. “I eat chicken, I eat salads, I eat vegetables, I just eat healthy and one day a week, I have my ice cream and my chips — but then the next day I go even harder at the gym. So I still live life but a healthier life.”