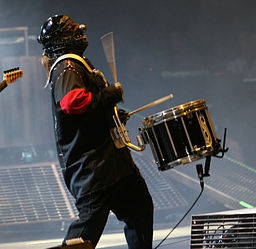 Shawn Crahan, percussionist in the band Slipknot, is doing something unusual for a guy who’s a public figure in a heavy metal band.

His latest endeavor involves making a documentary about eating disorders, and he’s currently soliciting the stories and feedback of fans and the general public to help shape the project.

“I know how incredibly difficult these disorders are to live with, to speak about, and to have to confront,” Crahan wrote on the band’s website. “I want to be direct, honest, and unflinching in telling your stories of struggle and triumph, failure and success as you find your path to a healthy life.”

Crahan explains that his life has brought him into contact with many people who suffer from eating disorders and that he feels compelled to do something about it.

“I have seen the devastation eating disorders inflict on both the people suffering from them as well as on their families,” he explained. “I am not foolish enough to believe this will cure anyone, but can we help to save someone? Isn’t that a chance worth taking?”

The musician is currently looking for men and women of all ages who have been diagnosed with anorexia, bulimia and/or any other eating disorder to be interviewed for his documentary.

I warn you now that I intend to ask a great deal of you. I am not interested in telling only part of the story. I want to speak to you and film your story. I want to be positive but not condescending, to be honest, but not cruel. My hope is that your experiences will give the woman or man suffering in silence the strength to get help. My hope is that telling your story will empower you to gain control of your illness.

Crahan has directed other documentaries, including videos for Hollywood Undead’s “We Are” and Motionless in White’s “America.”

While Slipknot is currently on a break from touring, they plan to release their next album late next year.