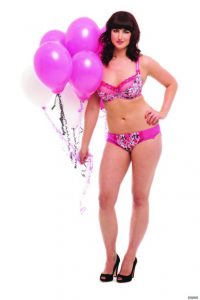 Alice Jackson used to run two hours a day and eat only lettuce.

That was back in college, when the 5-foot-9 Jackson reached her lowest weight of 108 pounds.

“I felt really, really depressed, and I didn’t care if I died,” Jackson told The Daily Mail. “I just felt awful. All I could think about was food and calories.”

Recently, however, she was a finalist in a lingerie modeling contest for “curvy” women. She didn’t win the competition – the title went to 22-year-old fashion student Lotte Williams. But Jackson said that the victory wasn’t her main goal in being a part of the contest.

“I will be hopefully carrying on my promotion of body confidence and helping those who are recovering from eating disorders,” she wrote.

Before gaining publicity for the lingerie modeling, Jackson volunteered at eating disorder charity I-Eat. She now weighs a healthy 154 pounds and notes that she’s no longer “controlled by calories.”

For Jackson, the contest was a platform for spreading more awareness about eating disorders.

“I’m healthy, and that’s why I think I look good in lingerie,” she said.