Past Miss USA Winners Say Pageant Girls Are Getting Too Skinny 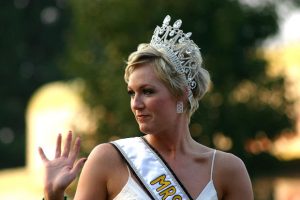 After Erin Brady, Miss Connecticut, was crowned Miss USA on Saturday, a discussion was sparked among past pageant winners about body image.

Namely, a few women think that beauty pageant contestants are getting too thin.

Kirsten Haglund, Miss America of 2008, told HuffPost Live, “The girls, I thought, were much too thin. I agree that if you would have tested their BMIs that they probably would have been much too thin.”

Nancy Redd, Miss Virginia of 2003, agrees that society is moving toward a “smaller is better” ideal for swimsuit and clothing sizes.

Winner of Miss USA in 2003 Susie Castillo also echoes these statements: “I was a little shocked too, sitting in the audience and seeing ribcages showing, protruding from these girls’ skins.”

Last year, Haglund opened up to CNN about her struggles with anorexia – a condition that plagued her teen years. She claimed that she survived on things like Diet Coke and coffee. After being encouraged by her mother to receive treatment, she created the Kirsten Haglund Foundation, which helps to raise awareness about anorexia and other eating disorders.

Castillo gives “pageantology” lessons to young girls, in which she encourages them to maintain a healthy weight, despite the fact that skinny is the standard in the fashion and beauty industries.

“I realize that 10 years ago, when I was Miss USA, I was a lot thinner too – only because I was younger and active,” she said. “I was an athlete. I wasn’t that thin. And I agree that it’s going in a way where girls are just super thin.”