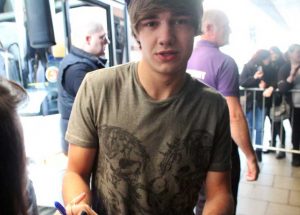 Pop star Liam Payne has been in the spotlight lately for his weight, but the singer is striking back at fans who are calling him fat or making other negative comments about his body.

Payne recently took to Instagram, where he shared his body mass index, 22.8, in attempts to prove he isn’t overweight.

“Now just because I’m sick of seeing this everyday so I just want to clear up what the media do to people these days,” he wrote on Instagram. “Is it wrong to be normal? Or do I have to look like an Olympic swimmer just to get your approval into the cool kids or can I accept that the person I truly love thinks I’m the coolest kid in town anyway? Think I’ll vote the second one 😉 enjoy your day people.”

Payne also made some good-natured jabs at the criticism he’s been receiving, posing in a shirt that was stuffed with pillows with a caption that read, “I mean OH MY GOD I’m just so fat these days I think I need help! Quick someone take the cookie jar.”

Payne started attracting more attention that focused on his weight when he appeared in a video message to a fan on Vine.

Some people have been blaming Payne’s girlfriend Sophia Smith for the alleged weight gain, tweeting things like, “Sophia making Liam so fat so he won’t be able to run away from her in time.”

Liam’s response to the criticism has been classy, however, and he’s reminding his fans that writing vicious things about other people doesn’t help anything.

“Morning everyone please don’t be sending hate to people that’s never what I want to sit here and watch arguments all day so let’s calm down,” he tweeted.