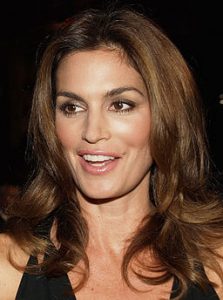 A leaked photo of supermodel Cindy Crawford made waves on Twitter last week, but not for the reasons one might think.

Th photo, which came from a 2013 cover story published by Marie Claire Mexico and Latin America, depicts Crawford baring her stomach and thighs, which look age-appropriate and “unperfect” for a 48-year-old woman.

“No matter where the photo came from, it’s an enlightenment — we’ve always known Crawford was beautiful, but seeing her like this only makes us love her more,” wrote Marie Claire‘s Jessica Pels and Chelsea Peng.

‘I was never one of the skinny girls’

Speaking with the magazine at the premiere of her new documentary, Crawford said that it’s important for women to be comfortable in their own skin.

“If women would treat themselves with the same kind of love they give to their friends, that would be such a great gift we could give ourselves,” she said.

Crawford also has said she tries to set a good example for her daughter by not making self-critical comments.

“If we go out for ice cream I’m not going to not have any, I’m just going to have the baby-size cone. I don’t want her to think that taking care of yourself means depriving yourself and not having fun.”