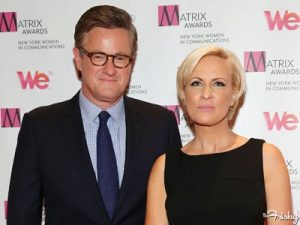 Co-host of MSNBC’s “Morning Joe,” Mika Brzezinski, opened up about her own struggles with exercise bulimia, an eating disorder characterized by overeating and then excessive exercise in order to burn off the calories.

In the May 2013 issue of MORE magazine, Brzezinski promotes her new book, “Obsessed: America’s Food Addiction – and My Own,” and speaks candidly about what she went through before seeking treatment. Her binge-and-purge behavior included entire boxes of cereal or room service for three, followed by hours of exercise to compensate for the behavior.

“I can eat the Domino’s pizza if I run 10 miles afterwards,” she said in the MORE interview. “That’s what I’d do after bingeing — punishing runs.”

Driven by a desperate need to feel in control

Like many struggling with eating disorders, Brzezinski says the root of her problem was a desperate need to feel in control of her life. As the daughter of Zbigniew Brzezinski, a former advisor to President Jimmy Carter, she claims that she never felt good enough for her family – and the feeling of not measuring up led to her destructive behavior.

“[As] the youngest in a brilliant family, always feeling like I couldn’t keep up,” she said. “… I thought eating was something I could control, unlike what I felt was a lack of intellect … Food was the thing I could count on. Food always loved me back.”

Recovering and speaking out

Brzezinski claims that she kept the eating disorder to herself for years, not wanting to experience the embarrassment of revealing her problem. Friend and TV personality Diane Smith was the one who ultimately helped her to seek treatment.

Now Brzezinski is very vocal about the topic of nutrition on air, speaking out against things like soda and junk food on “Morning Joe.”

The full interview can be found in MORE magazine, which is on newsstands now.