Model Crystal Renn Opens Up About Her Weight Loss 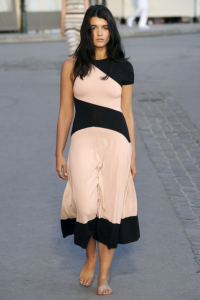 The model Crystal Renn 24 has walked the runway for big designers like Chanel and Jean-Paul Gaultier and has appeared in ad campaigns for a variety brands like H&M, Dolce & Gabbana, and Jimmy Choo as well as plus-size retailers like Lane Bryant and Torrid. She is also posed for the biggest fashion magazines in the world.

Many spectators are finding fault with her because they fear she is losing weight and caving to the medias demands to stay thin. Renn is also feeling the extreme pressure to keep her plus size status, which is not easy since she now wears a size six/eight. The modeling industry generally considers size 10 and up to be plus size. It is no wonder so many women not just Renn struggle with their weight and what is considered thin and plus size. The average woman is an eight/ten. Therefore, according the media and society anyone who is a size ten is a plus size.

Renn has openly discussed her weight battles and eating disorders in the past, and says she has to swear off labeling herself to avoid another relapse. “I had anorexia ultimately because someone else set the standard for me and I wanted to follow it. And if I followed what the public wanted from me or what the media wants from me I would be doing the same thing – I would have a binge eating disorder.”