Miss San Antonio Stripped Of Her Title For Gaining Weight 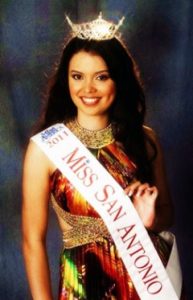 Seventeen-year-old Domonique Ramirez had her sparkling beauty pageant tiara yanked off her pretty little head for gaining weight. A perfect example of how teen eating disorders are triggered and how ironic this comes to light during eating disorder awareness week.

Domonique is a pretty seventeen-year-old girl who is being accused of being insubordinate, chronically late and over weight! This young woman is not just going to sit back and let the San Antonio beauty pageant organization and those affiliated with it drag her through the mud she is suing. On the counts of insubordinate and chronically late she is not at fault at the age of seventeen she is still a minor and the law requires chaperones and drivers so if no one showed up at her door to pick her up who’s fault is that certainly not hers.

While a specific amount of weight gain has not been stated, it is hard to imagine she gained a significant amount of weight at her age and with a teenager’s energy and activity level. Therefore, she is being punished for eating.

Dominique said in a statement that she had been working very hard and made changes to her lifestyle and exercising to fit into the clothes they wanted her to wear and they still told her she was a failure. This should ring a lot of bells for people with eating disorders and the many people who try to help them overcome the eating disorders. This situation is a disgusting example of how teenage girls fall into an eating disorder trap. She will be lucky if their comments have not already triggered an eating disorder not to mention having to live with this experience.