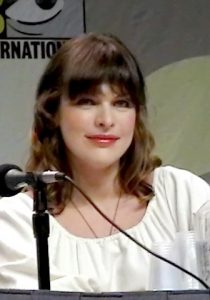 In an interview with Never Under Dressed, the 37-year-old stated that women in the U.S., particularly, live in a culture where airbrushing creates extreme body dissatisfaction.

“I feel like in America you know there are two strings; either obesity or anorexia and I think both of them come from this perception that people in magazines actually look that way,” she said.

Jovovich said that she understands why models are expected to look like “super goddesses,” but personal flaws are what make an individual.

“Everybody wears so much makeup to look perfect but just end up looking crazy, you know? I think European women are just much more chilled with it, they kind of don’t expect that they should look like a magazine walking down the street, because nobody does.”

The model says that she feels her most confident when she’s doing an action film, where working out five times a week and eating clean gives her a confidence boost. But she also claims that true confidence comes from a sense of inner strength.

“[I] think if you feel like a goddess, you just embrace what you have and accentuate it.”

When asked whether or not the modeling industry has a ceiling age, Jovovich said that it boils down to talent, not age or beauty:

I feel there is no ceiling if you are an intelligent person because you’re always going to be interesting to people, you know what I mean? Look at L’Oreal, they work with Andie McDowell. There is no ceiling when you have talent, intelligence, you’re passionate, you’re still going to get a beauty contract, it doesn’t matter how old you are.

As for making public appearances, the model says that the red carpet actually gives her “the willies.”

“It’s kind of the only time that I get kind of nervous.”

Jovovich concluded that her definition of beauty is all about intelligence and wit – not just a pretty face.