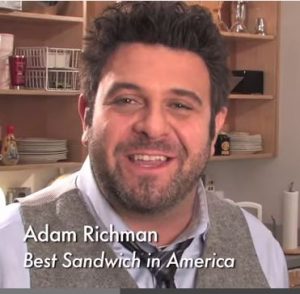 Adam Richman, former host of the Travel Channel show “Man v. Food,” showed off a dramatic 70-pound weight loss in the latest issue of Cosmopolitan UK, wearing just a pair of cleats and socks and posing with a soccer ball in the photo.

Last December, Richman opened up about his weight struggles in Men’s Health magazine. The article, “Man vs. Flab,” detailed how the TV star grappled with the demands of the show (which required him to do things like eat 72-ounce steaks) and the impact it had on his health.

“Off the set, I exercised and ate healthy,” Richman wrote. “I figured that as long as my blood work and heart were good, I was good. But those efforts were no match for the thousands of calories I’d eat over the course of a shoot.”

As his energy and mood declined, Richman explained that he reached a point where he knew he needed to make a change.

“I went in for a checkup, and when my doctor had me stand on the scale, even he was surprised. Seeing that number (which I’ll take to the grave) was a turning point.”

And while being on the set of “Man v. Food” eating things like almonds and yogurt was tough, Richman says the benefits of being healthy outweigh missing the food.

“To go from hating the way I looked to being a Cosmo centerfold is a profound honor,” Richman told the magazine. “If you’re a guy who’s always been the fun-to-be-around teddy bear, then all of a sudden people are viewing you as sexy, it’s nice.”