Lady Gaga’s Vomit Stunt: A Nod Toward Her Past With Bulimia? 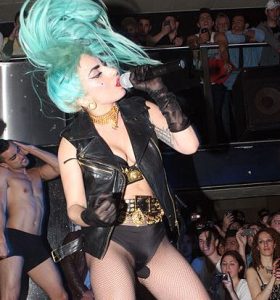 The Internet is abuzz with news about Lady Gaga’s provocative performance at South by Southwest in Texas this week – where she had a woman deliberately vomit all over her on stage.

Two minutes into Gaga’s performance, self-proclaimed “vomit artist” Millie Brown appeared on stage, chugged some green liquid, and then proceeded to throw up all over Gaga’s chest. A little while later, Brown stuck her fingers down her throat again, this time upchucking black goo all over the singer. The two writhed around in the mess, creating one of the most controversial stunts ever performed live by a pop singer.

Opinions are flying in regards to what Gaga did, with some accusing the singer of glamorizing bulimia. Yet Brown says that her “vomit art” doesn’t affect her health or her diet, calling it a “cleanse for the body and mind.”

Others suggest that the performance is a nod toward Gaga’s own struggles with eating disorders, which she has openly talked about in the past.

“I believe in being an individual and speaking your mind is one of the boldest things you can do,” Gaga said in a YouTube video last week.

But is making projectile vomiting something “entertaining” the right message to send to fans that might be struggling with eating disorders? Many are saying no.

“It’s provocative, grotesque and utterly indefensible,” writes Felicity Morse at The Independent. “She is wrong to think that showing an attractive skinny woman making herself sick is anything other than misleading, damaging and dangerous.”

Source: The Austinist, The Independent