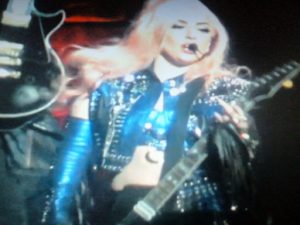 Not surprisingly, celebs had a few things to say about Lady Gaga’s controversial stunt she pulled at a performance during the South by Southwest festival in Texas this month.

The performer had a “vomit artist” throw up on her while on stage, triggering a whole slew of questions from fans and media about what the performance symbolized: Was it representative of Gaga’s past struggles with an eating disorder, or just a publicity stunt used to put on a good show?

Demi Lovato, a performer herself who has publicly battled an eating disorder, wasn’t happy with Gaga’s antics. She accused Gaga of glamorizing eating disorders and called the situation “sad.”

“Putting the word ART in it isn’t a free card to do whatever you want without consequences,” Lovato wrote on Twitter.

Gaga has finally responded to Lovato’s concerns, arguing that she not only supports Lovato’s own recovery, but that she didn’t intend for the performance to be symbolic of bulimia.

“I have struggled with an eating disorder for over 10 years, and I take that very seriously,” Gaga told E! News. “I take the struggle of others very seriously.”

She went on to say that she was proud of the performance, which was meant to convey a message of rage and pain.

“This performance had absolutely nothing to do with any eating disorder, and we never intended for it to be taken that way.”