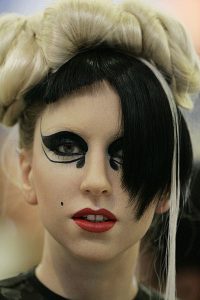 Lady Gaga oozes confidence, both on and off the stage – but is it all just an act?

The famous pop singer and fashion icon recently opened up to Glamour magazine about her 10-year battle with bulimia and her struggles with body image.

“I always have been [conflicted about my body],” Gaga told Glamour. “And some days are better than others, you know? Some days I feel fantastic. Today’s good. [But] at the end of the day, I’m a tortured soul.”

Gaga, who is famous for her onstage strip routines and wild antics, revealed back in September that she has battled anorexia and bulimia since she was a teenager.

The confession came after critics “fat-shamed” her for gaining 25 pounds last summer. She has since lost the weight, saying that she’s now happy with her looks – even if she doesn’t have a perfect body.

“I’m not a supermodel,” she said. “That’s not what I do. What I do is music. I want my fans to feel the way I do, to know what they have to offer is just as important, more important, than what’s happening on the outside.”

During school, Gaga said she was bullied for being “fat, ugly and weird.” Now, however, she encourages women to love and accept themselves for being unique.

“[I am] not conventionally beautiful. If there was some sort of mathematical equation for beauty, I don’t know if I would be the algorithm. I’ve always been OK with that.”

Due to her negative experiences as a bullying victim, Gaga launched the Born This Way Foundation in 2011 – an organization that aims to empower youth. On Nov. 3, 10 runners representing the foundation will race in the New York City Marathon. The runners have raised $115,000 for anti-bullying programs.

As for Gaga, she says she’s finally at a place in her life where she’s content in her own skin.

“I’m confident in who I am,” she said. “I’ve come to a place in my life where I’ve accepted things that are me, as opposed to feeling pressure to explain myself to people around me. That’s just the way I’ve always tried to be. It didn’t change when I became a star.”