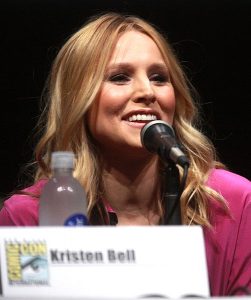 New mom Kristen Bell isn’t hopping on the lose-the-baby-weight bandwagon like other celebs who have given birth and quickly bounced back into great shape.

But Bell isn’t buying it.

“I refused to worry about something I could not change, and I still refuse,” Bell said in a recent interview with Redbook magazine. “I am not a woman whose self-worth comes from her dress size.”

Sitting out the struggle

Instead of joining in on what Bell calls the “rat race,” she plans to get her pre-baby body back with time – if it doesn’t happen quickly, that’s OK, the actress said. She gained a healthy 43 pounds with her daughter, and is currently about 15 pounds away from her pre-pregnancy weight.

As for returning to work, Bell wants to strike a balance between her craft and her family.

“I still want a career.  Lincoln will always be number one, but I think if you can cut that cord of obsessiveness, then you can work and be a good mother and wife.”

On loving her body

Yet learning the art of self-acceptance, Bell admits, isn’t something that’s easy:

Look, I’m like any other woman. All this evolved BS that I’m telling you is my mantra: It’s not something I practice naturally. I had to surrender to not worrying about the way I looked, how much I weighed, because that’s just part of the journey of having a baby.

Bell also admits that husband Dax Sheppard loves his wife’s baby body, and asked her “to stay chubby after the baby was born.”