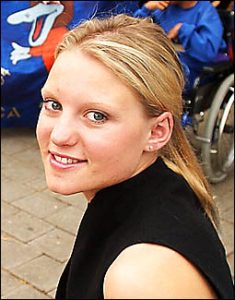 Jessica Smith, who retired from competitive swimming in 2007, has released details of her 11-year struggle with the bulimia. Her eating disorder started as a teenager at school in Grafton in 2000.

Jessica’s Comments About her Eating Disorder

Jessica felt like she had ht rock bottom she remembers a swimming coach telling her at the age of fourteen that she was heavy and need to lose weight. The bulimia started when she was fifteen or sixteen years old, she recalls when she missed out on a being selected for the 2000 Paralympics. She says her eating disorder came about as a combination of low self-esteem, missing out on the 2000 Paralympics and the pressure from her coaches to maintain a specific level of fitness.

Jessica’s story is pretty much like everyone who has an eating disorder. She states she will struggle with it the rest of her life but she did get treatment and is doing better.