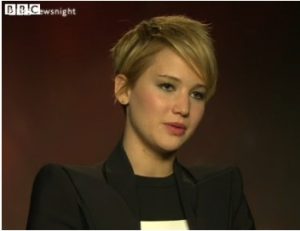 As the face of “The Hunger Games” movies, Jennifer Lawrence feels she has a duty to uphold a certain image in front of young women.

In a recent interview with the BBC, the actress explained how she fought to keep her character, Katniss Everdeen, from looking too thin.

“When we were doing the first ‘The Hunger Games,’ it was a big discussion, ’cause it’s called ‘The Hunger Games’ – she’s from District 12, she’s obviously underfed, so she would be incredibly thin,” Lawrence said. “But, I just kept saying, ‘We have the ability to control this image that young girls are going to be seeing.'”

Lawrence acknowledged that young women today are faced with unrealistic standards about beauty and body image.

“Girls see enough of this body that we can’t imitate, that we’ll never be able to obtain, these unrealistic expectations, and this [character] is gonna be their hero, and we have control over that,” she said.

And when talking about her refusal to lose weight for a role in the past, the actress seemed to have a strong stance on the subject.

“It’s better to look strong and healthy,” she said.

When asked about her feelings on the sexualization of women in Hollywood, Lawrence admits that it’s a growing problem.

“Sex sells, and for some disgusting reason, young sex sells even more,” she said.

And does Lawrence regret her risque photo shoot for GQ at the age of 20?

“It was a PR move basically, that I was completely comfortable with. I don’t have any regrets about that.”