Ireland Baldwin Being Called “Too Fat” To Model 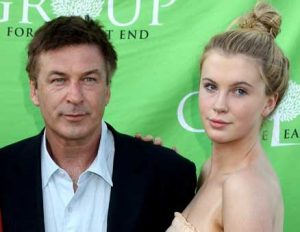 Ireland Baldwin, daughter of Alec Baldwin and Kim Basinger, is lashing back at critics who say she’s “too fat” to start a modeling career.

The 17-year-old celeb has been openly criticized by many since an incident several years ago when a voicemail from her father was leaked to the press, in which he called Ireland things like “selfish” and “a pig” in a moment of anger.

And while his daughter has since forgiven him for the incident, she says it’s no one’s business but her own what she chooses to do with her career.

She wrote on her Tumblr page, “What I don’t fully understand, is what is the good in commenting on a photo of a 17-year-old girl and calling her fat, ugly, etc? Is that helping you in some way?”

Staying positive and helping others

Ireland says she tries to see the good and beauty in everyone around her – even the people who are judging her. And modeling, she notes, is something that “can really help you feel beautiful.” The teen also admits that she has struggled with body image and self-esteem issues, and that living in the shadow of her mother – who was a famous model – can be difficult.

“I … get compared to my Mom quite a bit and this is where I bridge into the point of this whole post,” she wrote. “I AM NOT MY PARENTS. My mom is one of the most beautiful woman in the world. She is 5’9, I am 6’2. She is petite and fragile, and I am fit and… more to love tehe. I have a booty, she has a thigh gap.”

And what does Ireland say to the people who accuse her of piggybacking on her parents’ fame?

“I am not seeking fame by association. I do not want to be simply know as a model. I have passions and interests of my own that I want to soon give life to. I want to be known for helping others and being a healthy role model.”