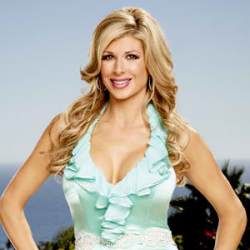 According to a new story from E!, “Real Housewives of Orange County” television reality star Alexis Bellino has revealed her 13 year struggle with both anorexia and bulemia.

Alexis attributes the divorce of her parents at age 12 as one of the traumatic events that triggered her struggle with food. She claims that at that time in 1988 she just didn’t feel like eating. Once she got to college, she began purging more regularly after going out with friends. She also admits to using laxatives as a weight control measure.

Bellino understands that eating disorders are a lifetime disease and although she has been through a lot of therapy and is in a better place right now, she also knows when to ask for help, such as when difficulties arise in life like the death of her father. It was her mother who encouraged her to seek help for the first time in college.

Bellino has chosen to reveal her struggle as a way to help others also dealing with this disease. She says that her marriage to her second husband Jim has helped improve her confidence. She says recovery is possible though she still is not fully healed.