Golden Age Hollywood Actresses Were Skinny, Not The Voluptuous Ideal We Thought 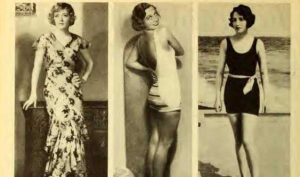 An interesting article on Blisstree reports that Hollywood actresses in the early age of film were not the full-bodied, voluptuous females we thought they were.

A 1931 article in Photoplay magazine was recently dug up from the archives, revealing that the measurements of famous starlets like Dolores Del Rio and Gerta Garbo were equivalent to the thin actresses of today – despite the fact that many of them are thought of with a sense of nostalgia for an era when “curvy” women were more appreciated.

The numbers tell a different story

Del Rio was honored in the Photoplay article, being given the title of “Best Figure in Hollywood.” Her measurements? She was 5’4″ and 120 pounds, with a 25-inch waist and 36-inch hips. Even by today’s stringent female body standards, this is still considered thin.

The heaviest actress was Irene Rich, who was 5’5″ and 134 pounds – hardly qualifications for being called “heavy,” but a reflection of how body image standards have not changed much since the 1920s.